I took a look at these screen shots of pre-release Mountain Lion Server, now 3 months old.

Here are some differences I noticed in the GUI widgets. No big drastic changes, but interesting to those of us building data-entry/database oriented software. Perhaps some of these are in Lion, but not that I’ve noticed.

Posted by Basil.Bourque at 01:16 No comments:

Man Without An Office, Out and About

I often work at any place that strikes my fancy. Sometimes at home, sometimes at the home of a colleague or a friend, and occasionally for an hour or two at a coffeehouse. After some trial and error, here's a list of the gear I've found useful for nomadic work.

LED-backlit is a must. Smooth coverage across the screen and bright. One inch thin. Should last for decades or longer. Lightweight and easy to carry. And LED requires very little electricity, which is important to avoid overloading household wiring.

This Viewsonic model is the best monitor I've found not only because of high-quality and low-price ($200), but because of this surprising consideration: portability and easy to stow. For the nomadic use, the monitor should be easy to put out of the way and easy to move from place to place. This ViewSonic has a removable base that simply unscrews from underneath. Even better, the screw is designed to stay attached and not fall out, so you don't lose it. Secondly, this monitor has the right kind of box. The box is compact, with a sturdy lid and built-in handle, and robust tab slots for locking shut. Inside are pieces of styrofoam that slide easily onto the left and right sides of the monitor. The styrofoam is the compacted solid type, rather than the open-cell kind that rapidly falls apart into disintegration.

By comparison, Dell uses an all-cardboard box which, while green, does not make for easy or durable re-use.

The ViewSonic also tilts, which seems like no big deal until you use a monitor that doesn't.

The ViewSonic has such a low price that I've bought more than one, stashing them at homes where I tend to visit.

Viewsonic sells a 22-23" model alongside this 24" model. There is not much difference in price any longer, so I recommend the larger pixels for aging eyes like mine. The other model has a noticeably more compact and lighter box, so you may consider that one as well.

I strongly recommend getting a monitor with full-DVI resolution, 1920 across by 1080 high pixels. There are still many monitors with fewer pixels, but without the cost savings of yesteryear, so avoid them.

Some newer monitors come with only an HDMI port rather than a DVI port, because they come from the factories aimed at the television markets. I've not tried any, but I suppose they should work well with your Mac given the correct cable or adapter, such as these HDMI to mini-DisplayPort cables from Monoprice.com.

Of course the MacBook is standard gear for office nomads. I chose a smaller size screen since I use the external monitors most of the time.

I suggest buying an extra power supply. I have one I keep with me in my backpack. That leaves one at the ready in my home office. Apple sells two power supply models, one 65-watt and one 85-watt meant for the larger and more power-hungry MacBook models. I usually buy the 85-watt model for maximum compatibility with any Mac model, as they work fine with MacBooks that only need 65-watt. The 85-watt models are a bit larger and heavier, but not by much in the recent incarnations.

Reminder: Apple is replacing, at no cost, old MagSafe power adapters with frayed wiring or similar problems, as part of a lawsuit settlement. Just take your old faulty adapter to an Apple Genius appointment to see if it qualifies.

My favorite mouse of all time is now called the Apple Mouse, with the rubber roller ball on top. Once sold in a Bluetooth model, it now is only available with a tail. 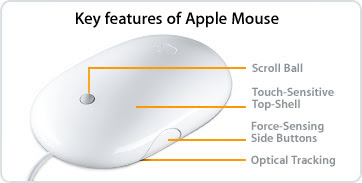 That roller ball is also a button, and I always set that button to switch apps, the same as pressing Command+Tab. I found that extremely useful and intuitive to use as I tend to spend my working hours switching back-and-forth between programming tools, documentation in PDF readers (Apple Preview or Adobe Reader), documentation in web pages, and email. This feature in unfortunately missing in Apple's newer touch-surface mouse.

Grudgingly, the new Apple Magic Mouse with the amazing touch-surface is becoming my new favorite. At first I did not like this mouse at all. But with the advent of Lion, Mac OS X 10.7, this mouse now makes more sense as Lion brings a new set of gestures you can make on the touch surface.

Bluetooth users beware: Some Bluetooth mice have no power On/Off switch, or have a difficult switch. For stowage in a backpack, you really want a good switch to prevent the battery from being drained.

Tip: For stowing in my backpack, I use the original plastic jewel box in which the mouse arrived. I kept the plastic tray inside, to hold the mouse. The box is surprisingly strong. Using the box keeps the mouse protected, and prevents the battery-draining power switch from sliding to the On position.

Another tip: Get a flat-surface teflon-style mouse pad. When out and about, you may encounter surfaces unfriendly to your mouse. Also, stash one or two of those alcohol swipes that come in a foil packet to clean away mouse gudgies. 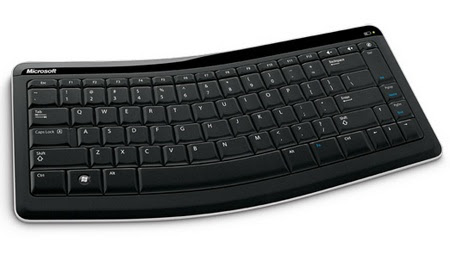 I am not usually a Microsoft customer. But I have found this ergonomic-style keyboard to be significantly more comfortable than Apple's straight keyboards. They keys' shape and location prevent the bent-wrist position that aggravates carpal-tunnel problems.

Unfortunately, Bluetooth and ergonomic seem to be mutually exclusive terms. I’ve found no other options but this one. Fortunately this Microsoft keyboard works well enough with Mac computers. It has Windows-logo and Alt keys rather than Command and Option keys, but you can either get used to them, or change their meaning on your Mac in the System Preferences > Mouse panel. You can even slap on a piece of colored electrical tape to cover up that Windows logo.

Actually, I bought the "6000" version of this keyboard. My model cost more than twice the 5000 price and came with a separate Bluetooth keypad which I never used and gave away. From what I've read, the 5000 is basically the same as the 6000 and I presume it will work well fellow Mac users.

Seattle is riddled with car prowlers as the Seattle Police Department chooses to blame the victim rather than bust criminals like other cities do. So I need to keep my gear with me rather than ever leaving it in my vehicle. 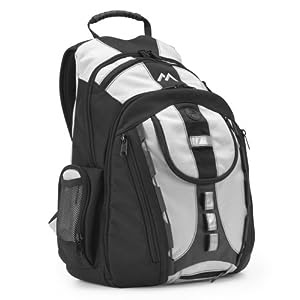 I use a previous edition of this excellent backpack from Brenthaven. Built like a tank, looks brand-new after years of use, and made to fit your MacBook gear.
Posted by Basil.Bourque at 11:42 1 comment: